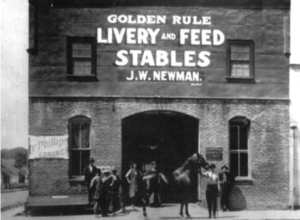 The earliest information of the lot location, and I emphasize “location” because most articles or business advertisements do not give an address, but a location.  Many say “South Main and Burnett.” Most of them don’t give much help, was it on the west side or east side – north or south of?  What is helpful are photographs that include business signs and the building designs.  Plus, we use newspaper stories to piece this information together.

The following is a pictorial review of the occupants who owned and worked at 135 South Main, Sebastopol. 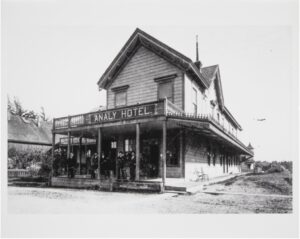 In 1906, the Analy Hotel was moved from the corner of Main and Bodega, where the Abacus Wealth Partners is located. This was the third location for the hotel in Sebastopol. It began as a residence, then dance and meeting hall and then the new owner, Mayor J.B. Loser in 1906, turned it into a successful hotel, bar, and restaurant. It was razed in 1919 for the “betterment of progress”. 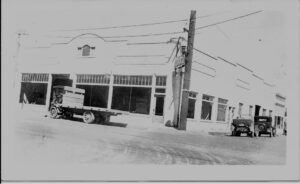 This building was built from the ground up in 1922 and the Fellers and Hillard Garage was the first business to move in. It was accommodated with all the modern necessities of a garage. The sign on the building helped us nail down the location. It was on the north east corner of Main and Burnett – right where the Livery on Main building is. Also, the building design will be helpful in later photos. In the early 1930’s, the Sebastopol Garage owned by John J. Jones, Harry J. Hutton & and Elmo E. Jones, occupied that space. There was a succession of owners with the same business name until 1963. 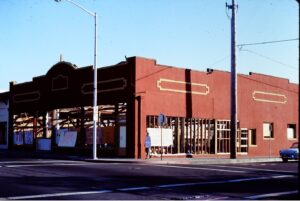 Joe Giammanco operated Joe’s Budget Shop from 1963 until 1977 at this location. This was his third business location in Sebastopol. In his younger years he was an opera singer with the San Francisco Opera Co, and others. Many local folks remember him bursting out in song as he sliced them a generous pound of salami. He used Burnett Avenue as the front door, with the address as 6940 Burnett Street, but as you see it is the same building. This photo was taken in 1977 before the building was about to be demolished. 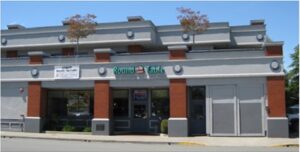 Raymond Fiori purchased the empty lot in 1979 with hopes of a new location for a Fiori’s Restaurant which didn’t become a reality. Then Peter Singler, from Occidental, purchased it in 1982 for his Round Table Pizza Restaurant, relocating from its Healdsburg Avenue location that year.  The new two story building also housed these businesses from 1982 –2019: the Video Vendor, Sonoma Title, Benson Optical, First Security and Sonoma West Times.  Coincidentally, Round Table Pizza is now at its third location in Sebastopol on Gravenstein Hwy. So.

The Livery team thanks Mary and the dedicated museum volunteers for helping to keep history alive in our sweet little town.

The museum’s current exhibit happens to cover the automotive businesses in Sebastopol from 1900 to today.  Since the site of The Livery has been a garage in the past, it is included in their historical look at those businesses. The Museum is open Saturday and Sundays from 11 a.m. to 2 p.m. where visitors can take a look at Sebastopol as they might remember it. The museum is located at 261 South Main Street, next door to the Sebastopol Chamber of Commerce and across from the Post Office.

The museum notes that they do the best with what they know.  Please contact the museum with your questions or requests at 707-829-6711.